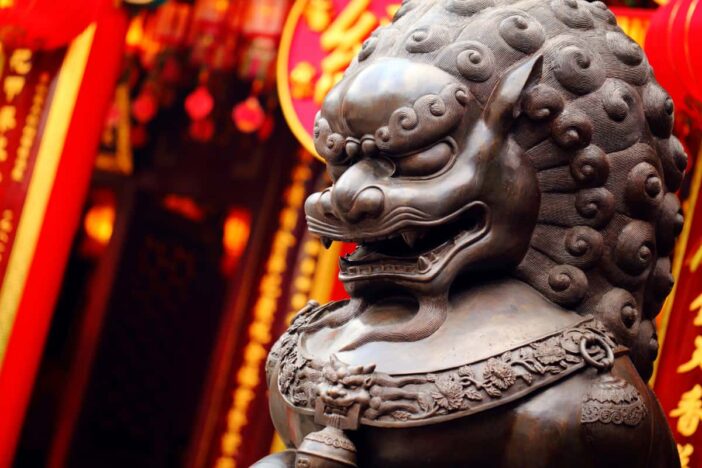 What are Foo Dogs?

Foo dogs are Chinese feng shui symbols of protection that typically “guard” entrances to buildings and homes. ironically, they don’t actually represent dogs, but lions. They always come in pairs and are traditionally carved from granite, marble, or some other decorative stone. however, they can also be cast in iron, bronze, or ceramic. Due to the high cost of materials and the craftsmanship required to carve them, these statues were generally reserved for only the wealthiest and most prestigious families, or for imperial palaces, tombs, and government offices. consequently, they represented not only sacred protectors against negative energy, but also an aristocratic status.

how did the fu dog mythology develop?

Their mythology has origins dating back to Buddhism in the Chinese Han dynasty during the 2nd century BC. according to Buddhist legend, preaching the truth of the dharma is akin to “roaring like a lion,” which will eventually silence all other voices. Asiatic lions, which were introduced to China via the Silk Road trade route, were often kept by the emperor. these living pets served as the inspiration for the sculptures of the imperial guardian lion. the Chinese refer to them as “shi,” which literally translates to “lion.”

Over the centuries, the popularity of these symbolic lions spread from china to tibet, thailand, korea, japan and all over asia. Japan adopted them from Korea and referred to them as “Korean dogs”. they were later introduced to Western cultures by the Japanese, who changed the name to “foo dogs” or “fu dogs.” Although the words translate as “buddha” and “prosperity,” the Chinese rarely use these prefixes in conjunction with guardian symbols and never refer to them as “dogs.” Inconsistent references are compounded by the fact that these statues often more closely resemble Chinese breeds of dogs (eg chow chows and shih tzu) than predatory lions.

foo dogs are often depicted as ferocious crouching beasts. their menacing faces serve as a deterrent to anyone wishing to enter with malicious intent. the stylized eyes, teeth, and claws of these Chinese totem poles are intended to capture the power and raw emotion of the animal. by contrast, European depictions of lions are much more realistic and with rippling muscles.

Each pair of guardian lions includes female and male versions, which are manifestations of yin and yang. the male lion has an embroidered ball under his right front paw that represents the world. the female has a small cub below to the left of her, representing the cycle of life. symbolically, he protects the outer physical structure, while she protects those who live inside.

their mouths may be wide open, as in a roar to drive away evil spirits, partially open with large pearls in them, or the female may have her mouth closed. when they are open and closed, it symbolizes the sacred sound “om”. This mantra is prevalent in Buddhism, Hinduism, and other religions around the world. traditionally, when placed in front of the houses of high-ranking officials, the number of curls on a lion’s head denoted the rank of the official. the more curls, the higher the rank.

according to feng shui, how should foo dogs be placed?

To balance the energy (good and bad chi) in your home and maximize harmony and good fortune, it’s important that you arrange your foo dogs correctly. they should be placed on both sides of a doorway or doorway facing out. facing the entrance, the male should be on the right and the female on the left. in the case of small figurines, bookends or table lamps with a foo dog base, it is advisable to store them in the same room on the same table or shelf, and follow the placement recommendation. if they are the same sex (sometimes easier for manufacturers), make sure the inner legs are the ones that are up.

does the color of your lion dogs (also known as shishi) matter?

Chinese metaphysical arts are intricate observances of appearance, composition, position and time, and their effect on the unseen forces that bind everything together…so of course color matters. not only that, but so does the location of the foo dogs based on the direction outside they are facing or the position of the room relative to the front door. And you thought quantum physics was complicated!

In feng shui, the direction a door faces is associated with different colors and elements. therefore, you can enhance the impact of your foo dog-warding grand entrance or gate by adhering to these nuanced feng shui directional guidelines derived from wu xing.

Smaller foo dogs placed on tables, mantelpieces, or other surfaces within a room also have an ideal color position according to the traditional feng shui bagua map. 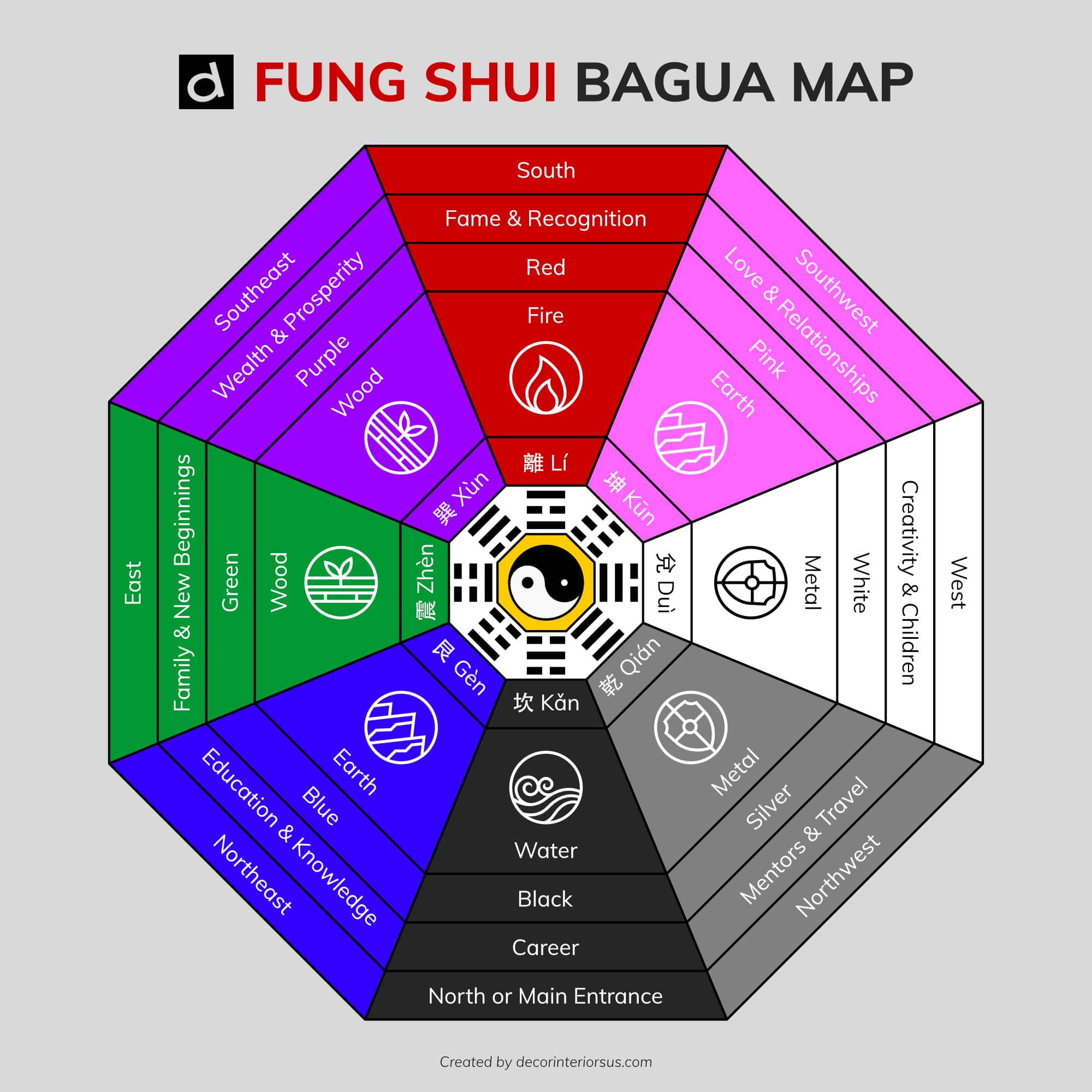 The Classical Bagua Map considers the compass position of your front door, while the Western version does not 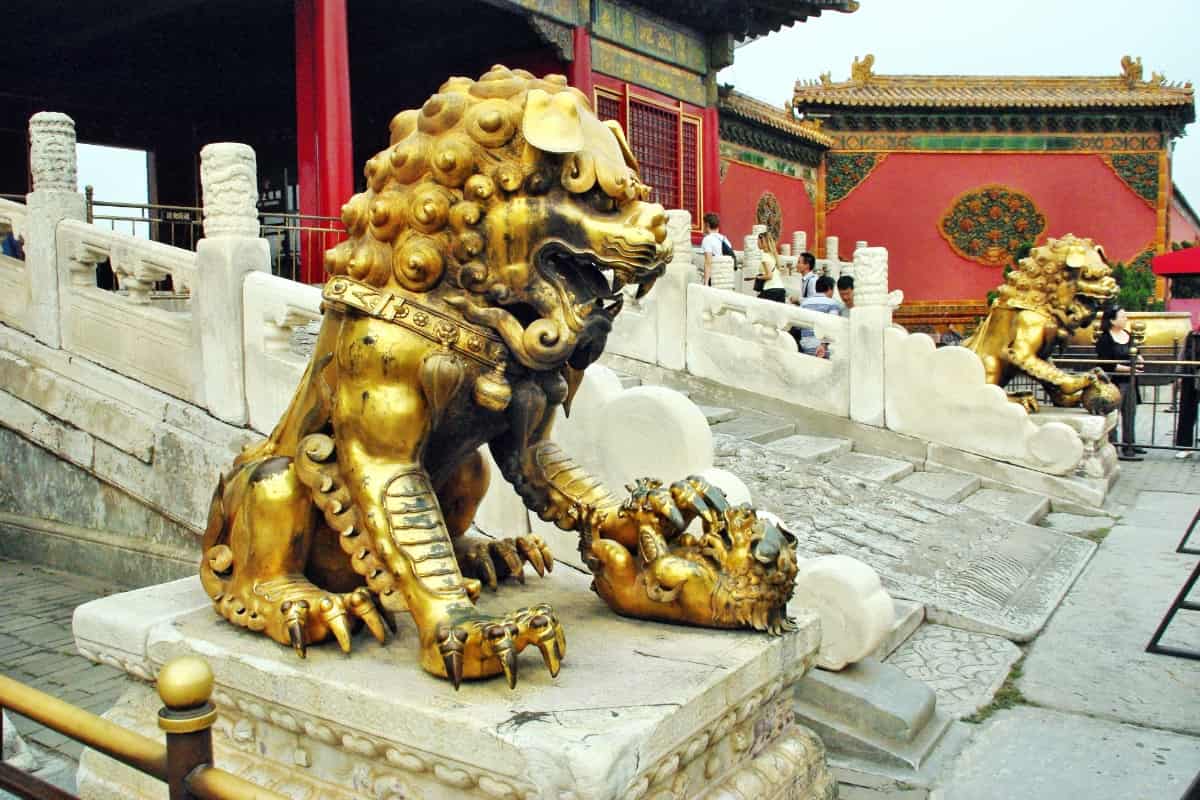 Depending on your commitment to feng shui optimization, you can go as crazy or casual as you like with how and where you display your foo dogs. you can have two males, two females, or just one total, so take everything with tweezers. treat them with respect and feel free to give them a pat in thanks for keeping you safe. but be sure to keep them facing out from the front door, so they keep evil spirits out of your home rather than in. The globalization of business has also led to the recognition of the potential value of various cultural rituals in creating an environment of hospitality. consequently, the adoption of practices such as feng shui and the use of totem poles such as foo dogs are becoming more common in the workplace [ogilvie, ng, xiang, ryan & year 2018].

See also: Is it OK to Have 2 Doors Facing Each Other? – House Caravan